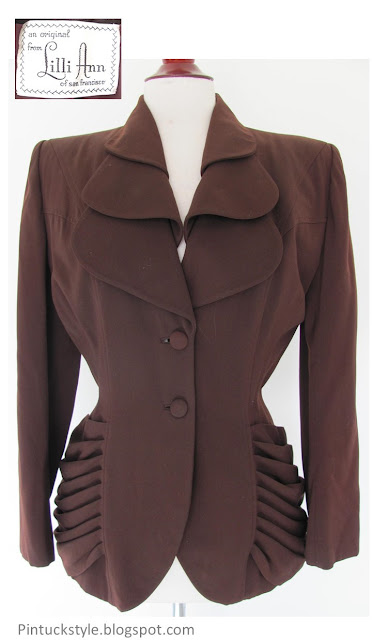 While the longer length skirt is a clue to the era a suit was designed in, often those have been altered to suit current styles. The jacket however will have significant details specific to the 1940's.  I'm slowly listing the best of my collection, and this jacket is a favorite of mine.  Here are some of the details that I think make it a stand out piece. 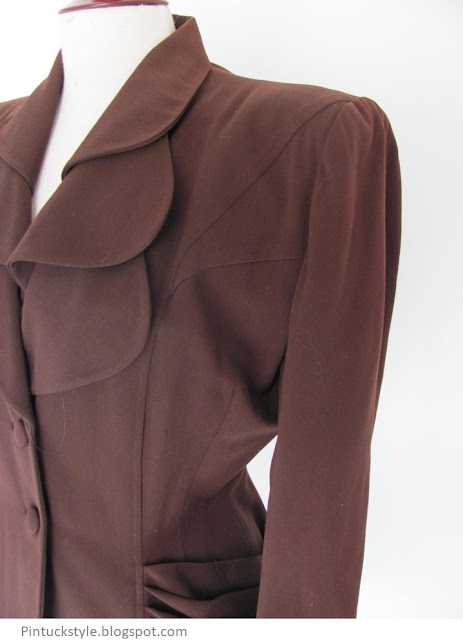 This jacket shows several elements unique to early designs and those from the 1940's. Probably most noticeable are the padded shoulders. On this jacket, the pads are about 1" thick at the shoulder edge. This creates an hourglass silhouette with a wide shoulder design. 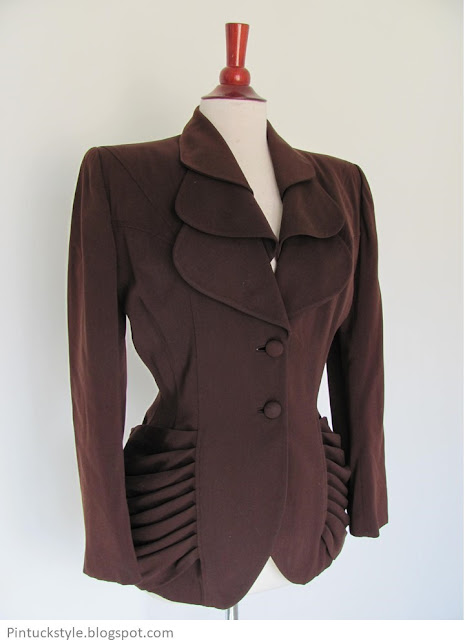 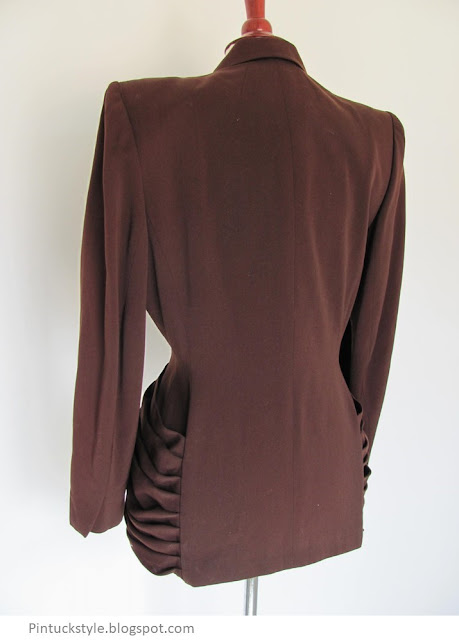 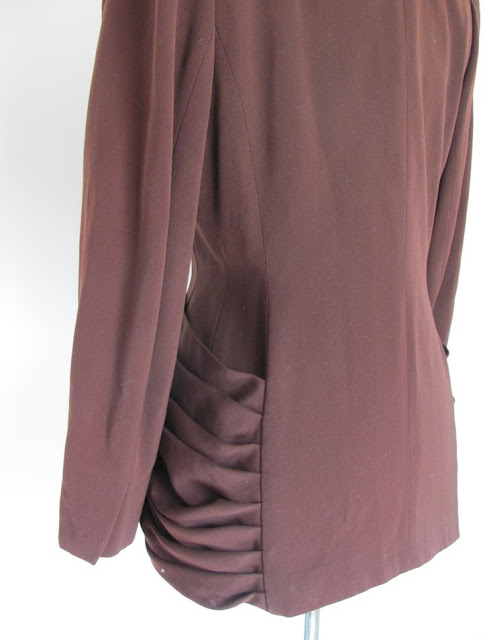 The fitted hipline is another clue to the era. While this one has dramatic pleated pockets that seem to be draped in swags over each hip, the style is fitted and has a longer hem than later designs. These pleated elements are not lined, and they are actually light and soft, not tailoered or structured. 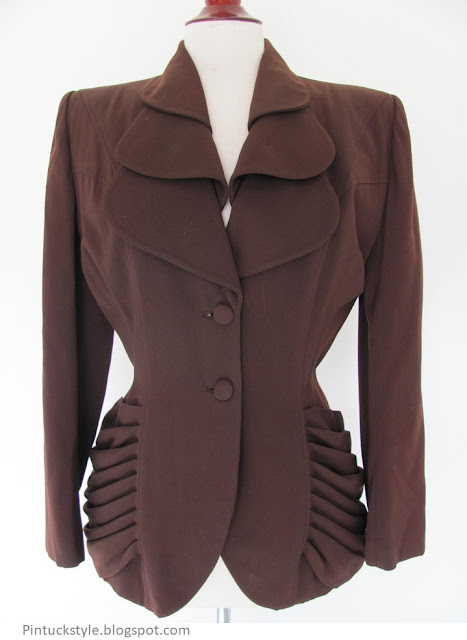 The three layered petal collar enhances the shoulder width, adding a rhythm and texture to the upper torso. The jacket itself has a lowered top button location, fixed below the point of bust. Most often the first button is at the bust level, but here that is still open in the "V" neckline of this collar feature.

The jacket fabric is a deep chocolate brown (often lighter here in photos to show details more clearly). And the texture is a fine wool gabardine, a smooth finish that does not compete with the pleated pockets and layered collar.  The lining is a brown crepe, as seen here in the label photo. 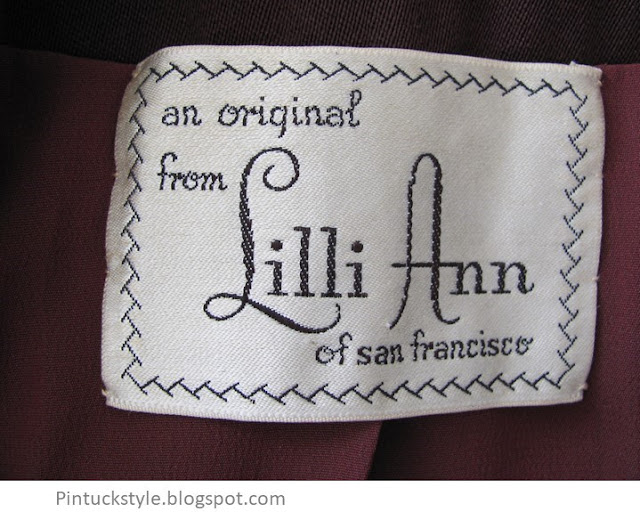 This Lilli Ann label can be found starting with this era in 1949 thought the late 1950's. 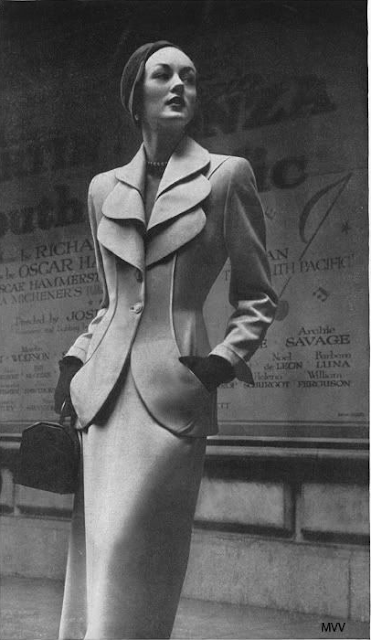 This Lilli Ann advertisement photo from 1949 shows several style details that are very similar to the brown jacket here. Most noticeable is the layered petal collar, the curving center front edge, and the two button closure. Clearly this suit jacket used the same design pattern with modifications to create the hip pleated pockets. Using this ad as a guide, it's probable that the brown jacket was designed and produced the same year, 1949.

Another example of a similar suit jacket can be found at "No Accounting for Taste" where a 1949 suit in jade green has a similar silhouette and hem curve with two button front.  In that example, the collar is an extended tuxedo or cardigan style, rather than the three layer petal version seen here.  By 1953, the petal collar style would be smaller, and the front would button up higher with four buttons instead of two, to create a more fitted bodice.

LABEL: “an original from Lilli Ann of San Francisco”

MEASUREMENTS:
Bust: no button, this is an open “V”, but bust is about 43” based on position of lower buttons
Top Button: 37” around when buttoned
Waist: Lower Button: 32: around when buttoned
Hips: open curved hemline, about 44” around when flat on table
Length, front: 29 ½” from neckline at shoulder, down to hem
Shoulder Width: 17” between armhole seams across shoulder seamline
Across mid-back: almost 16” across between armhole seamlines
Sleeve length: 17” long from underarm seam to wrist hem

This jacket is listed for sale at my shop: Pintuck Style on Etsy, where you will find other vintage fashions.