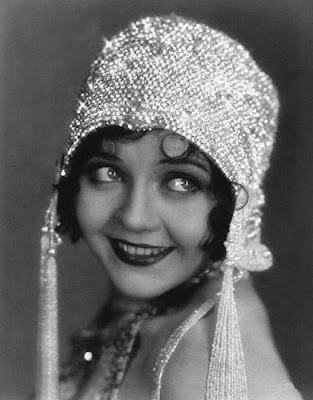 Flappers, the wild and young generation of the 1920's are back with us once more. Captured by the medium of colored film, several actresses of 1922 are shown HERE in self conscious poses, gestures and movements. Kodak film experiments of that era recorded for us a generation that is now long gone, but is still a strong influence on us today. Enjoy this video, it's such an intimate peek into their lives.

Doing the math, if the young women in these shots were about 22 years old, then they would have been 110 this year.

photo image above is a random flapper photo that is not seen in this film, but I like her anyway

Pioneers in California Fashion: Peggy Hunt and the Affliliated Fashionists 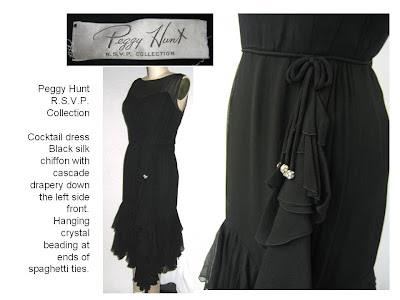 California fashion industry was well under way by the 1920's. Los Angeles had found its niche in two important local businesses: Hollywood and Tourism. This meant that by creating a strong brand identification with both the luxury of resort and sun sports, along with Hollywood and the glamour associated with it, a new identification was found for a growing apparel industry in the region.

During the 1920’s, the fashion industry saw several new trade and marketing organizations develop. The Associated Apparel Manufacturers of Los Angeles and the California Fashion Creators were important firsts during this decade of growth. The Fashion Creators would stage fashion shows at movie star homes to market new designs to the public.

By 1921 the Associated Apparel Manufactures of Los Angeles established a bureau of information, employment office, and a buyers office for out of town buyers. This meant that the fashion industry now had a core or 'go to' for information and marketing events.

In 1926, a group of 6 female designers, who owned their own businesses, formed the Affiliated Fashionist group. Its purpose was to promote their companies with many social events and fashion shows, often staged in the designer's homes, around a pool or outdoor Los Angeles theme. The first members were: Irene Bury, Viola Dimmitt, Peggy Hunt, Violet Tatum, Pat Perkins, Marjorie Montgomery, Addie Masters, Louella Ballernio, Agnes Barrett, and Mabs Barnes. Nearly 40 years later (in 1962) Peggy Hunt, Marjorie Montgomery, and Addie Masters were still in business. Violet Tatum and Pat Perkins had retired from the group early.

Several members, such as Mabs Barnes, who in 1933 would create the Satin lastex swimsuit with a one-piece skirt panel in front and bustline fit, went on to design important innovations and trends. Addie Masters specialized in glamorous, yet casual at home fashions with a “wrap-rascal” dress and hostess trousers in 1939.

In September of 1946, the group staged a fashion show at Peggy Hunt’s estate that was attended by 400 guests and showcased 72 styles. Resort and cruise wear fashions predominated. Ethel Joutras was the co-ordinating director of the event where the following fashions were featured:

Addie Masters: cover-up group in black and white, exercise suit that was a one-piece play suit with shorts and blouse

Viola Dimmitt: raincoat-dress, a coat that could be worn as a dress, made from black nylon

Agness Barrett: slacks and fashions with a Mexican color theme

Peggy Hunt: black crepe with nude sheers, and a junior line with Children and Teen styles, and another group called "Jean Carol" that featured women’s dresses. During WWII, actress Deanna Durbin was costumed in a ‘Jean Carol’ label for a movie. Peggy was the first to show sheer-yoke cocktail dresses.

A press release in 1948, showed that at that time there were 8 designer members in the group. They were following Paris trends with 12” hems for day, and 9,10,11” for night. At this event, Peggy Hunt showed lace and marquisette accents and floor length gowns.

Louella Ballerino presented “American Gothic” dresses with subdued coloring. In 1950 she would show drapery prints in her dresses. Her styles were part of an "Americana" trend that may have spun off of the success of the musical "Oklahoma" in 1943. Agnes Barrett, like Louella presented nostalgic styles with a Victorian look that included braid trims, tucks, and skirts that flared in back.

Marjorie Montgomery designed for college girls with new looks in dolman sleeves, petal collars and cuffs, and easy skirts. Irene Bury kept to her classics and showed an afternoon dress in a green and white stripe.

Mabs Barnes had little change in her now popular swimwear styles, but she did feature new colors and fabrics, with control panties, and girdles.

Viola Dimmett's coats were water repellent with full backs and some hoods, worn belted or loose, styles that made her label a big seller.

From the early years of the 20th century through to the 1960's, growth for a new apparel industry in southern California was enhanced by these innovative fashion pioneers. They are partly responsible for the strong brand identification that California fashion has in the world. They promoted their designs with marketing innovations that proved successful, creating a California "style" that local designers today still rely on. 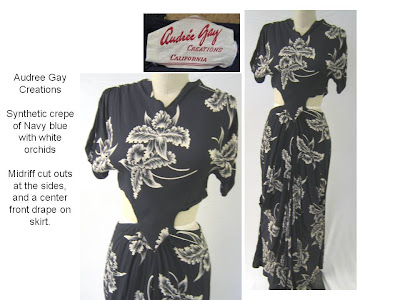 I saw the Alfred Shaheen exhibit of Hawaiian fashions recently and it brought to mind this sultry gown in an aloha print fabric. The fashion styling blends a bit of Pacific sarong skirt with a mainland cowl neck top. A flash of midriff is seen between the skirt and cropped top that is held in place by the insertion of a center front tab, attaching the skirt to bodice. This cocktail or evening style would have been a sensation on the dance floor of the WWII era ball room or private patio party.

It is made from a fine navy blue rayon crepe with white floral design, to immitate the better Japanese kabe crepe that was first imported and later inspired the Hawaiian tropicals of the 1930's and 1940's pre-war years. 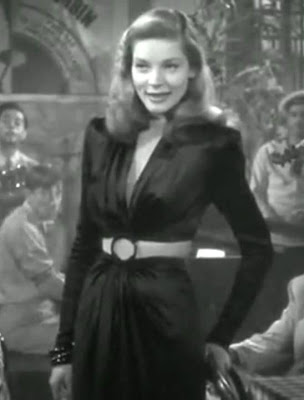 The aloha print rayon dress is similar to a sleek version of the same style by Milo Anderson for Lauren Bacall in 1944. Her sarong skirt and midriff top are linked (literally) by a metal ring: a style that would take fire in the 1970's. Her top is more artfully custom draped, but the overall sense of style is still the same: bared midriff with a tropical front draped skirt.

It is interesting that this flattering style is so seldom seen in fashion. The concept is a perfect example of 'less is more' when it comes to body exposure! 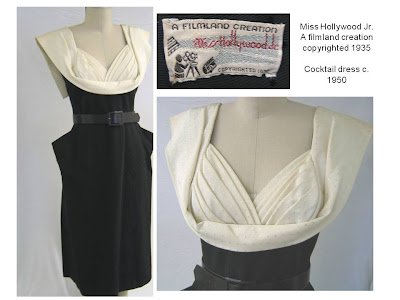 The shelf bust in vintage fashion is always a fun style to see. It is nearly daring, a bit outrageous, and always eye-catching. A recent blog post by Gertie on shelf bustlines presented a great gallery of styles that show a variety of versions. Many are draped, a few are pleated.

I remembered this dress from my California collection, and decided to share it with you. Maybe you will get some inspiration from seeing it up close and personal.

The dress itself is a heavy, crisp black faille, with the same fabric used for the bustline. Its late 1940's or early 1950's flange hip pockets help to balance out this imposing shelf bust and collar in white.

The label says it is "A Filmland Creation" by "Miss Hollywood". I"m guessing if you wear it, you will get discovered, or in the very least mistaken for Jane Russell or Marilyn's cousin, new in town and ready to be cast in a leading roll.