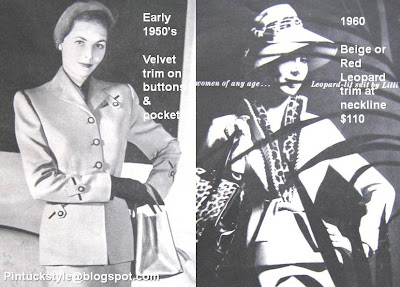 
The well tailored suit jacket became an important element for Lilli Ann designs between the late 1940's and early 1960's. During this decade, the overall silhouette was not be altered significantly, but details were many and varied considerably. Jackets showed a smooth fit in the torso, with long narrow or 3/4 length sleeves. The hip was fitted and hems were short or long. In general, the suit skirt remained narrow and unadorned. 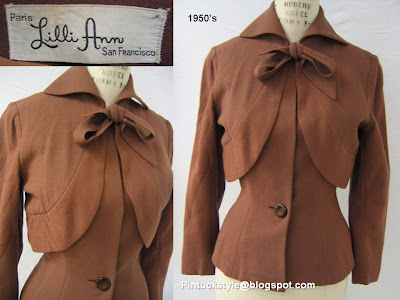 The brown wool suit pictured above from the early 1950's has a mock bolero with self bow tie. The face is framed by a wing collar. Bolero shaping sets off the small hourglass waistline which is emphasized even more by a single button. 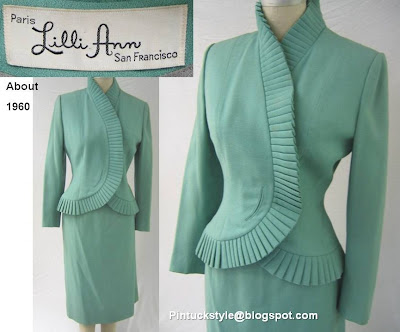 In this creamy aqua crepe suit from about 1960, a variation in small pleating is used to frame the face with drama. The use of an asymmetrical front is seen. Lilli Ann would use this popular design devise often during this era. 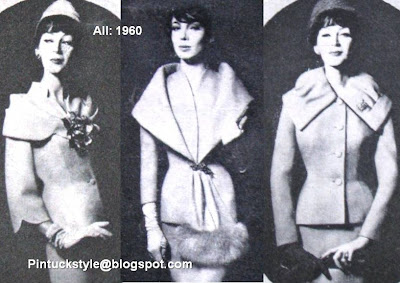 A Lilli Ann advertisement from early 1960 shows several versions of suits from the collection of that year. Continuing the trend that Dior began over a decade earlier, jackets appear to be derived from a basic fitted New Look silhouette. The body is then altered with many styles of collar and neckline drapery. Overall, the look is very feminine and dignified, spiced with details in texture and trim. 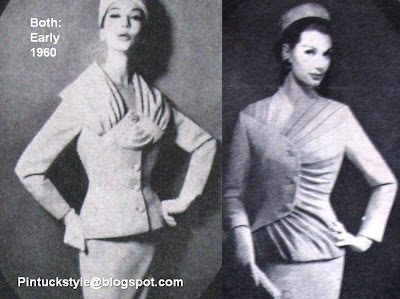 Following this collection in 1960, the design of Lilli Ann makes a notable swing towards more current fashion trends of the day. This was a move to showcase a younger, exciting and innovative look to the Lilli Ann customer. An updated silhouette left behind the New Look styles that Lilli Ann had promoted for more than a decade. 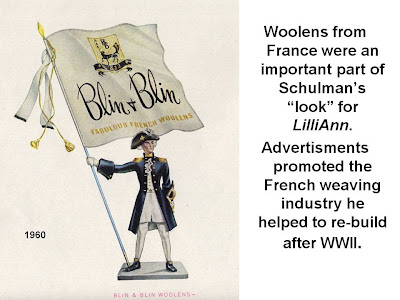 This article is third in a series on Lilli Ann fashions.
Earlier articles may be found in the links to the right.


Do not copy text or images from this article without permission.
You may contact us at the email address posted on this site,
thank you
Labels: 1950's fashion, 1950's Suit, Lilli Ann, Lilli Ann suit, Mad Men, pintuckstyle.etsy.com, Tailored Suit
Newer Posts Older Posts Home
Subscribe to: Posts (Atom)