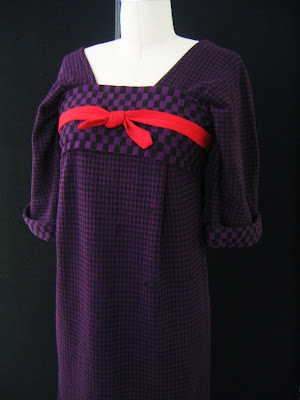 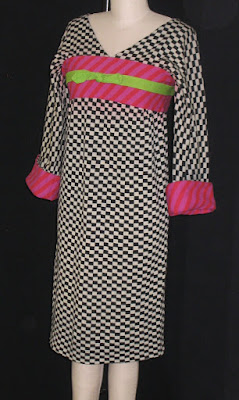 It's not often that we get a chance to see two vintage dresses that are from the same collection: similar in design, but different in fabrication.

Rudi Gernreich produced a wide range of innovative designs during his career, but the Kabuki dress remains one of the most recognizable. Designed in 1963 for his Autumn collection, it is a wool double knit with body drape. What made it so unique was the eye popping textile colors and the innovative bodice 'obi' belting across the bustline.

As early as 1954, when in his early 30’s, Gernreich was noted for his colorful, geometric, and unique styling. His styles are highly influenced by the flapper silhouette of the 1920’s, which was a departure from the hourglass look being designed in Paris by Dior. In 1951 he began working for Walter Bass, a California manufacturer. There he became well known for contemporary clothing design.

He created boxy jackets and tight pants and other clothing styles that would become more commonplace in the early 1960’s but were considered bold, sophisticated, and shocking 10 years earlier.

Like Claire McCardell and Bonnie Cashin, he was influenced by Asian garment styles. As a designer he felt that he was a practicing artist, where aesthetics were important. He also believed that a good design need not be discarded after only one season. 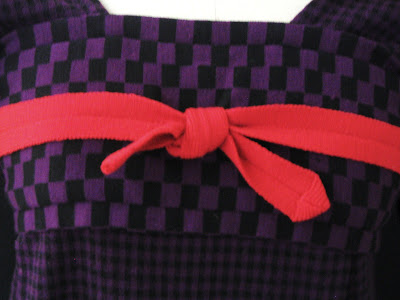 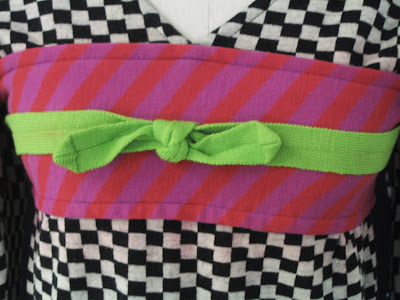 Wool knit textiles were produced by Harmon knitwear. In the early 1960's his color sense and ability to manipulate textile graphics were becoming popular. The bold colors and patterns here predict the trend in fashion that would become mainstream by the late 1960's and early 1970's. 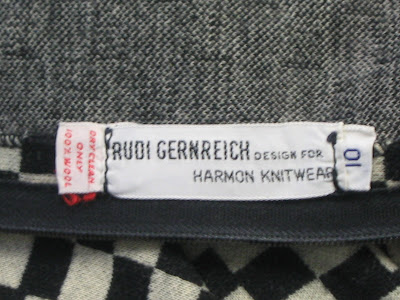 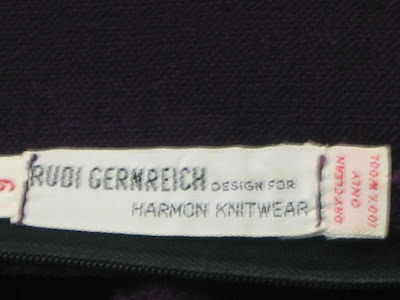 And finally, a quick look at the inside construction. The obi section is backed by cotton broadcloth to prevent it from stretching out of shape. 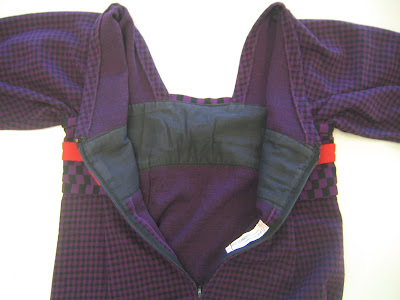 (click on the photos so see enlargements)
Please contact me if you wish to use these photos, thank you 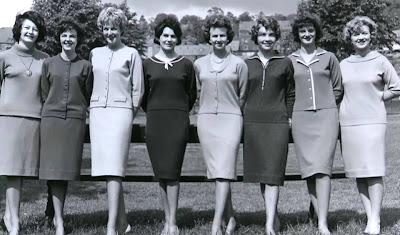 Cashmere and Pringle sweaters are a great combination that is getting harder to find. The weight and texture has made them a favorite knit and it's become impossible to pass up a vintage cashmere while cruising a good estate sale. 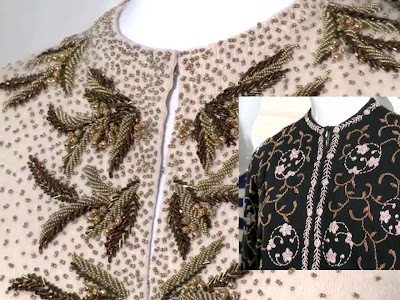 Recently I came across a great video for a recent exhibition, "From Hawick to Hollywood: the Women who wore Pringle". This looks at mid-century Pringle knits and is exhibited in Hawick, Scotland where Pringle is made. Wallace Shaw, who designed for Pringle between 1972 and 1978 shares his impressions about Pringle during that time. The gorgeous sweaters shown here are all from that video.

The Pringle webpage and video are ”HERE”. 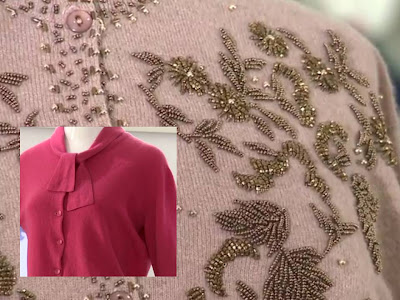 Don't these gorgeous cashmere knits make you want seek out Pringles? I know I do!
Also, I have to credit Lizzie at ”The Vintage Traveler” for sending me on this little journey into Scottish textiles. I have enjoyed every minute, and will share more with you later.
Labels: beaded sweaters, cashmere sweaters, From Hawich to Hollywood, Pringle, vintage sweaters 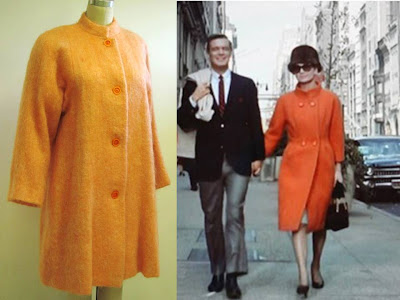 Fifty years ago Breakfast at Tiffany's captured an era and a generation, distilling glamour and charm into one amazing film.

It's never to late to join in the fun, especially with a bright orange coat, so Holly
Golightly! You can have your own from our Pintuck Style shop: HERE.
Labels: 1960's vintage fashion, Breakfast at Tiffanys, movie fashions, movies 1960's 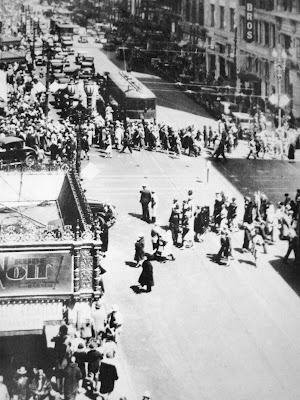 The 1920’s is a good place to begin a brief look into the California apparel industry. The decade began with a new but strong apparel business in Southern California so that by 1921, "The Associated Apparel Manufactures of Los Angeles" was organized. It would offer a bureau of information for area manufacturers. The organization also provided a buyer’s office for out of town buyers who would arrive by train from the east coast and other points in the country, to see fashions during market week. There was also an employment bureau to help provide the labor needed to produce the goods within the region.

Included with the "Associated Apparel" group was smaller organization called the “California Fashion Creators”. They were known to stage fashion shows at movie star's homes, providing an early link to the movie industry. The synergy between fashion and Hollywood continued to develop and grow during this decade.

In 1926, an industry organization called the "Affiliated Fashionists" was organized by six women who owned design firms. They would promote their fashions by hosting many social events and fashion shows. The original members were Irene Bury, Viola Dimmitt, Peggy Hunt***, Violet Tatum*, Pat Perkins*, Marjorie Montgomery**, and later Addie Masters**, Louella Ballernio, Agnes Barrett, and Mabs Barnes. All of these names and labels were important to the growing reputation for fashion that Los Angeles would market throughout the U.S.

San Fransicso in the 1920’s also had a fashion industry group, with such members as Dolly Meyers and Harvey Rothschild. In 1951 this group was still strong, producing fashion shows in Union Square.

Resources:
The information in this series comes from my thesis.
Most primary references are from "California Stylist" and the "Los Angeles Times".

This is original material and may not be reproduced without my permission.
Please contact me here at PintuckStyle if you would like to quote all or part for your own use, thank you.

A note on the image used in this post:
This is a commercial photo.
My father has written a note about it based on his own years in L.A.:
"Looking north on Broadway. This was the main intersection in L.A."
Labels: 1920's fashion, history of Los Angeles fashion industry, Los Angeles Fashion, Los Angeles garment industry
Newer Posts Older Posts Home
Subscribe to: Posts (Atom)