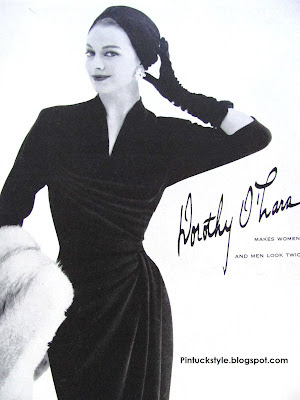 “Makes women look nice and men look twice” Magazine advertisement, 1957: crepe in black, taupe, royal blue, $55
Dorothy O’hara was a Hollywood designer whose dresses were popular from the early 1940’s through the early 1960’s. During her career she designed movie costume as well as fashionable dresses that were sold a better stores nationwide.

She was known as the “Sculptress in Fabric” for her dresses that featured artistic drape and fit. The dress styles were termed “step in”, referring to the fact that they were all-in-one with a zipper up the back, making the dresses easy to wear. She also designed crepe dresses that looked like suits, but were in fact one piece (1954). 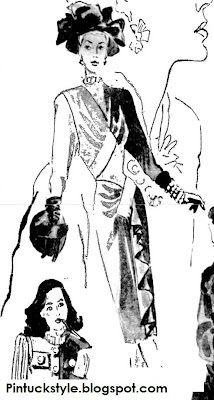 Dorothy began her career as a fashion model, a slim girl with red hair she would spend her life working with fabric and fashion. To learn pattern making, she studied at night while working as a model during the day. This training would gave her a opportunity to design for the company where she modeled.

As a movie costumer between 1945 and 47, she designed for starlets at Paramount, gaining experience in creating dramatic designs. She began her own fashion business in 1941 with her husband Hank Lunney, borrowing $800 using their car as collateral. This first venture was a line of six dresses that were produced on only two sewing machines that they bought and installed in their apartment in Los Angeles. She hoped to create couture style dresses in a production line.

By the end of her career, it was a multi-million dollar business sold internationally, producing between 400 and 600 dresses a day.

During her career she contributed numerous fashion tips that were carried in the local press. This marketing strategy would keep her name in the press and on the mind of her customer. In 1949 she recommended a slim skirt with peplum over the hips to create curves in a thin figure and conceal extra curves in larger sizes. She would produce sizes 12 through 20 to provide fashion for larger women as well as the fashionably petite.

Dorothy married to Lunney in about 1934 at the age of about 22. She lived in Orange County most of her married life and died in 1963 at the young age of 51.

Television: Dick Van Dyke Show (My Husband is a Check Grabber: 1963, fashions by O’hara are seen in this episode)