Lilli Ann Suits from the 1940's: the early years 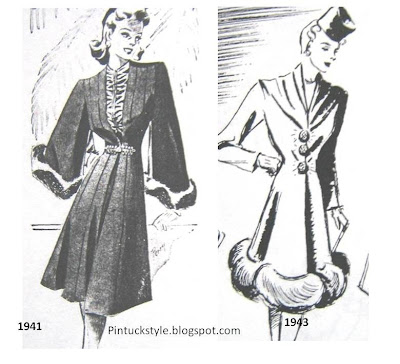 The history of the Lilli Ann company is interesting to American fashion. It was important to the economic development of San Francisco, as well as a large producer of woman's suitings from the 1940's through the 1980's. The early years show design creativity and luxury in style. Knowing the general silhouette and costume type will help the vintage collector to identify age of their Lilli Ann. This post profiles the early years.

In 1934, an apparel company called "Lilli Ann" was originated by Adolph Schuman and named for his wife Lillian. Originally this apparel company was a typical sort of start-up operation, with two used sewing machines and two part-time employees working in a tiny studio in the Chinatown district of San Francisco. Throughout the life of the company, it would be identified with San Francisco, both in advertising and in its economic and political influence in that city.

These early ads from 1941 through 1944 show suits and coat outfits advertised as a "costume suit". Silver fox fur and other furs are often combined with wool fabric to create a sense of luxury.

The dark costume suit above from 1941 (pre-WWII) has wide sleeves with silver fox fur trim, and was priced at $55. The fit and flared princess silhouette was typical of Lilli Ann's very feminine look during that era. The second coat from 1943 has silver fox trim around the hemline. Paired with a fez style hat, this has a Russian influence to the overall ensemble. Again, the costume suit has a fit and flare 'A' silhouette made distinctive by a draped collar. 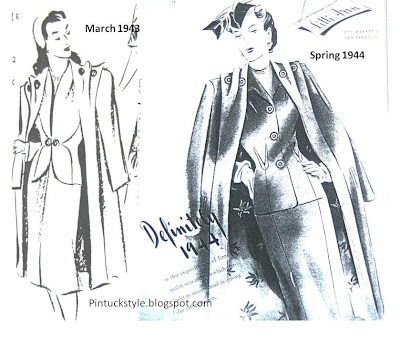 In this second set of illustrations, coat and suit ensembles are shown. Both coats have a button pleated revere lapel (both are essentially the same coat), although the light coat is from March 1943, and the darker set is wool from Spring 1944.

The suits worn beneath the top coats are form fitting, with sculptural seam lines. The light suit has a classic princess pattern draft that "V" points into the waistline button for a very slender illusion. The second suit has "V" details on each side of the waistline. The front is closed with 3 buttons that match those on the coat. It is also fun to notice how the original suit was accessorized with hat and gloves.

At upper right corner is a view of the "Lilli Ann" garment label used during that time. 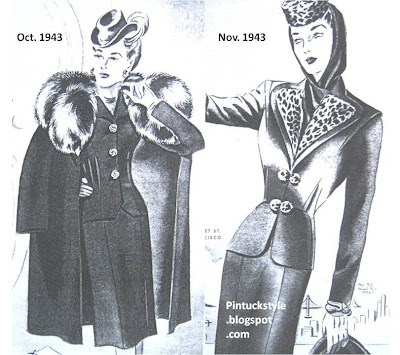 Both outfits shown above are from 1943. More fox is seen, this time as a large collar that is a style carry-over from the 1930's. On the other suit, leopard fur is used on lapels, buttons and toque hat. These details create visual interest in what are classic suit patterns. It is important to notice that a 6 gore straight skirt is shown with all suits during this era. The first skirt from 1941 was 'A' line in silhouette.

All through the war years, luxury was seen in Lilli Ann suits and coats. Excess use of textiles was controlled, as required, but luxury was available none the less. After WWII, Adolph Schuman would move to put his San Francisco suit company on the map with increased national advertising in "Vogue" magazine, along with some innovative political involvements. This began an important era for Lilli Ann company. 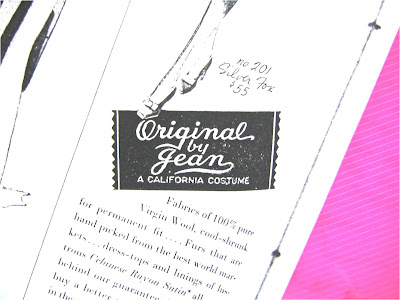 This advertisement shows the makers label used by Lilli Ann company through 1943 (important to notice that it does not list "Lilli Ann" name in that label). It does show "a California Costume" at a time when this from of regionalism was popular.
Labels: 1940's fashion, 1940's suit, Adloph Schuman, California fashion history, Lilli Ann, Lilli Ann suit, San Francisco fashion, vintage suit
Newer Post Older Post Home